We are currently running a couple of weeks behind on orders. 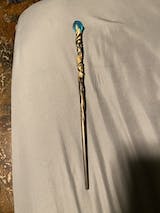 Thanks a lot, for this magic instant, you had make a really great work for my Wand conception!!

You could be really proud for that work

(And sorry for my bad english) 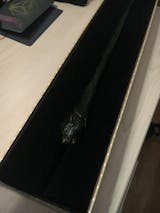 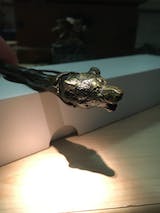 I have no idea what I was going to expect when I got my wand. This is above and beyond my expectations! I actually felt like I had been chosen by the wand! I also really liked the tag that explained what it was made from and what core it had! 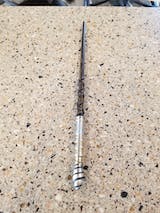 It’s so pretty! Nicely packaged, great customer service, and wonderful work! Exactly what I wanted and better than expected. Thank you so much! There will be much silly wand waving in this class. 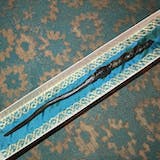 Everything was beautifully presented

Osbourne's Unique Style, personalization and exquisitely hand-crafted wands Rivals those of even ollivanders I am very happy with my wand it fits me perfectly which is why I highly recommendation for young & old witches and wizards to go to Osborne's to get their wands 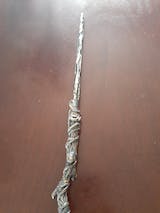 K
All Was Well Keychain K.V.
I want another 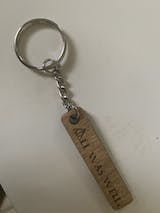 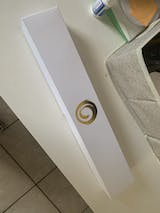 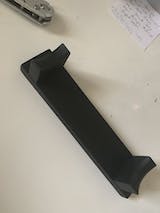 Might practice the dark arts! In love with my new wands. 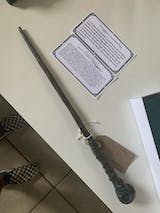 Feeling good and magical. Couldn’t be any better. 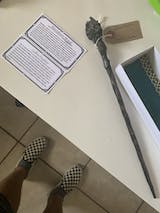 The questionnaire leaves room for open-ended requests. For my first wand, I filled it out, and all I asked at the end was that the wand has a Chaotic Good vibe. That's the one on the left: "Alder" and "Dragon Heart String". It looks like a simple, modest stick, but the handle looks as if they swirled the end of it around in a cauldron full of melted dragon bone. Metal af.

I tried a similar thing for my second wand, asking for something with a Chaotic Evil vibe, and received the one on the right. "Yew" and "Phoenix Feather". The hilt of this thing looks like a scaly monster is clutching and scraping at the wand with it's claws. The green and black paint job really pulls the aesthetic together too.

If I could afford to keep casually dropping $50-$60 on wands here, I would. The products are beyond worth it. Can't recommend these guys enough, will be buying again at some point. 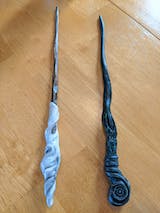 I ordered a wand based on Dumbledores first wand design, tweaked slightly to suit my own needs. Isaac and Gena went above and beyond to fulfil my order request and I was quite simply, blown away with what they produced. I cannot begin to express my appreciation for Isaac’s skill, the dude works magic of his own. If you want a wand - get it here at the real life Ollivander’s. 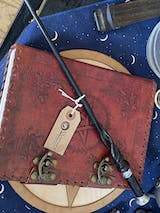 The wand box is great! Thank you so much! 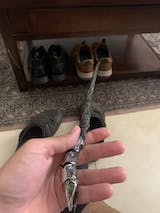 I’ll do review of the wand once it arrives, for now I really like the service and you always did your best to contact me as soon as possible to keep me informed

This is my second wand from Osborne’s and I love it!

I ordered a wand of my own a few years ago when they still had an Etsy account, and I knew I wanted one from this shop since the Craftsman on the wands in their photos were umatched. So, when my boyfriend and I were talking about going to a Harry Potter themed even and dressing up for it, I knew exactly where to go for a wand of his own. When I came in, I knew it would be as beautiful as mine and I was not disappointed. Thankyou for all your hard work and for bringing a bit of magic to this muggle world

I got a great wand. It turned out better than I expected. I will probably order another one soon.

I couldn’t have asked for a better wand!!! Seriously this thing is beyond perfect!!! Thank you guys so much for making it for me!!!

The wand itself was fantastic!
It felt light and easy and it had some really beautiful details on it!
It came in a nice box and had the details about your wandwood and core in it.

Super happy with everything about it! Thanks!

The box and wand are exquisite. It's very unique and personalized - just like Olivander's. So it's with the warmest recommendations that young or older witches or wizards go to Osborne's to get their new wands. But remember it's the wand who chooses the wizard. 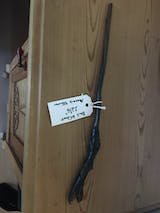 The wand is perfect! I asked for metal to be incorporated into it and they did it. Thank you Osborne’s Wand Shop! I will be ordering again in the future!